Posted at 12:52h in Blog by Christopher Wilsher
0 Likes

This blog is going to be about things I like, which are many and varied, but mostly about crime fiction and, in particular, noir, both film and literary. Noir is something I feel strongly about. Why? First, like jazz and the blues, noir is an especially American art form and, like jazz and the blues, noir has something to say about America. Second, noir, both film and literary, is an entirely misunderstood genre. And I want to try to fix that. The term “noir” is thrown around loosely so as to include any movie or novel that involves crime or criminals. Or as a synonym for “dark” or “edgy.” As a result, you see lots of writing calling noir “poorly defined” or “elusive” or “not really a genre.”

This is entirely incorrect and in upcoming posts I’ll show why.

To sort out what is and is not noir, it’s best to go back to the beginning.

The Cinematic Origins of Noir
To understand film noir, you must understand expressionism. Expressionism was an art movement that started in Germany in the late Nineteenth Century. The goal of Expressionist Art was to show interior mental states (often disturbed mental states) through use of color and exaggerated forms. Leading Expressionist artists included Edvard Munch (The Scream) and Egon Schiele. 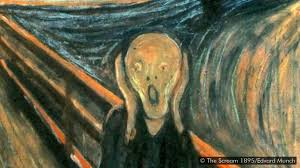 The Scream (1893)
This idea of depicting inner mental states through images was picked up in the Twenties by German film directors such as F.W. Murnau,(Nosferatu, Sunrise) Robert Wiene,(The Cabinet of Dr. Calgari) and Fritz Lang (Metropolis and M). The themes of German Expressionism, alienation, paranoia, and fatalism were reflected in dark urban landscapes and shadowy rooms and corridors. German filmmakers also employed: tilted cameras, low angle shots, and shots in mirrors, which distorted space and which reflected a world out of balance and where appearances were deceiving; low key lighting with its shadows that suggested unknown and hidden dangers; and, extreme close ups that conveyed a message of extreme emotion bordering on mental instability.

The Cabinet of Dr. Calgari (1920)
These techniques worked perfectly for what would become film noir, which concentrated on a seamy urban underbelly—thieves, murderers, prostitutes, unfaithful wives, crooked cops, crooked lawyers, crooked judges—that contrasted strongly with the optimistic and conformist zeitgeist of post-war America. Film noir America was a dangerous and out of kilter place in which old-fashioned ideas of decency and humanity were out of fashion.

Not coincidentally, the early noir directors–Billy Wilder, Otto Preminger, Edgar Ulmer, Robert Siodmak, and Fritz Lang–were all refugees from Hitler’s Germany. They not only brought the techniques of German Expressionism with them, but, more importantly, they brought the animating principle of noir. They had seen humanity at its very worst and understood there was no place in life for weakness or self-indulgence. The world is a harsh, cruel place and suckers get crushed. That’s the central message of noir.