20 Aug The Literary Origins of Noir

Posted at 23:46h in Blog by Christopher Wilsher
0 Likes

The last post concerned the cinematic origins of noir.  So, is noir an exclusively a cinematic art form?

Most definitely not.  It can be argued that noir dates back to Ancient Greece (“Oedipus Rex” “Antigone”) except that in Greek tragedy the main characters are of an elevated status–a king or a prince–something that can’t be said of a typical noir protagonist.

No, the first real noir story is probably Geoffrey Chaucer’s “The Pardoner’s Tale” which was written in the 14th Century.  Three boobs go looking for Death, who had recently taken their friend. A shadowy character in a tavern tells them they can find Death under a certain oak tree. They go seeking revenge, but instead of death they find a fortune in gold coins under the tree. One of the boobs goes back to town to buy ale so they can celebrate. While he’s gone, the other two decide to kill him so the gold will only have to be split two ways. The guy with the ale has poisoned it so his two buddies will die and he’ll have all the gold for himself.  When he returns, he gets killed and the other two then celebrate by drinking the ale and die of poisoning. 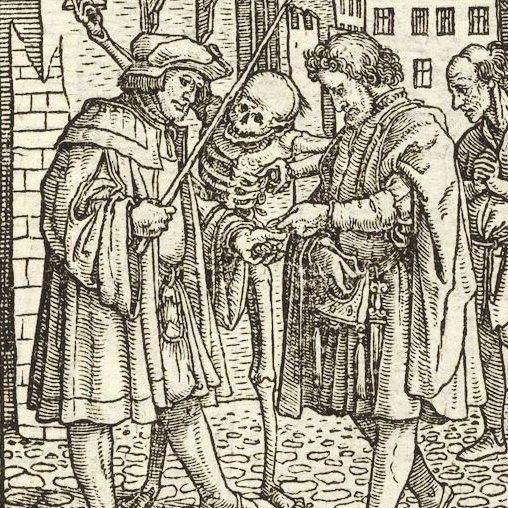 There’s also a strong element of fate. The shadowy character is most certainly Death, and the prediction—that they will find Death under a certain tree—comes sadly true. Fatalism is a strong element in noir. Because of certain character flaws—greed, insecurity, lust—the protagonist makes an initial bad decision and then cannot escape from his self-imposed trap as he piles one bad decision on another.

There was plenty of noir in Shakespeare’s works. “Macbeth” and “Hamlet” feature lust, paranoia, deceit, betrayal, and violence. Hamlet is indecisive and confused and, as a result, everybody dies. Macbeth is power hungry and easily manipulated by his wife. Typical noir protagonists. Any of Shakespeare’s tragedies could be made as a film noir—in fact, Orson Welles did make a noir version of Macbeth—although once again the elevated status of the protagonists make the works more tragedy than noir.