Posted at 07:07h in Blog by Christopher Wilsher
0 Likes

The theme of The Killers is that lying just beneath normal, orderly, respectable society is another world–chaotic, evil, and corrupt. Nick Adams is introduced to this nether world and realizes how easy it would be to be sucked down into it and never be able to escape. At the end of the story he decides to get away because his life can never be the way it was before.

Noir fiction became popular in the Thirties with the novels of James Cain, “The Postman Always Rings Twice” and “Double Indemnity.” Cain’s novels were distinguishable from the then popular “hardboiled” school of fiction in that his main characters were criminals as opposed to the detectives that were typical of the hardboiled school (for example Dashiell Hammett’s Continental Op and Sam Spade).

Cain’s writing owed two things to Hemingway’s The Killers (whether Cain would admit or not): the minimalist writing style (lots of dialogue, not much description), and the feeling that the protagonist, because of bad decision making, which is caused by flaws in his character, is ultimately doomed.

Cain’s books also introduced the central noir themes of duplicity, greed, and lust. As with The Killers there is an underworld, always present and always threatening to pull down the unwary.

The protagonist of Cain’s Double Indemnity is Walter Huff, a successful insurance salesman. Huff gets seduced by the lure of a woman and easy money but ends up destroyed. Late in the story he observes, “I had killed a man, for money and a woman. I didn’t have the money and I didn’t have the woman.”

Walter had seen the underworld and due to his own bad character, had gotten sucked down. 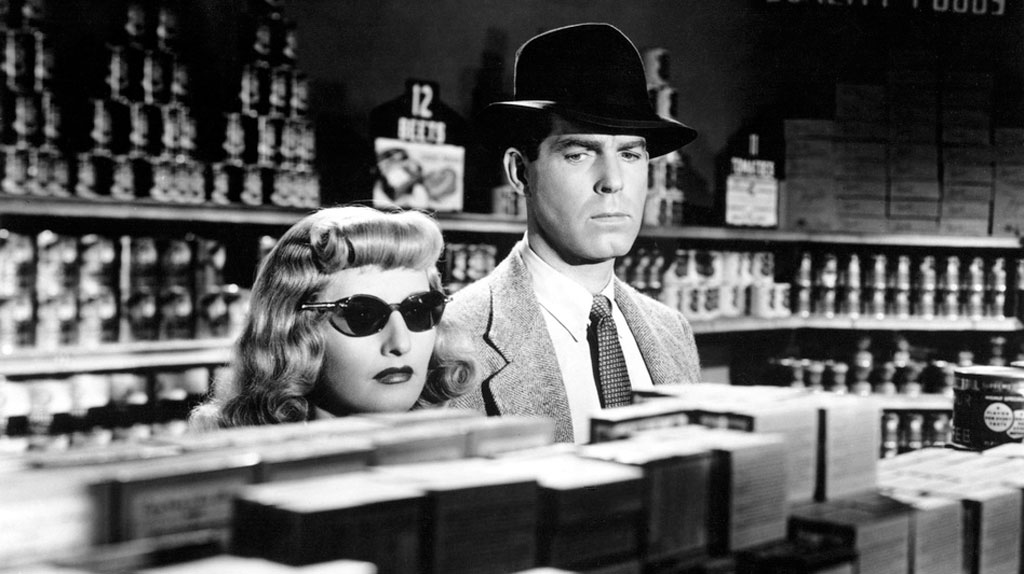 After The Postman Always Rings Twice and Double Indemnity the quality of Cain’s work diminished markedly. But noir fiction continued through the Fifties with novels by writers such as Jim Thompson, Davis Goodis, and Charles Willeford. Thompson’s works are the best and the bleakest. Several, including The Getaway starring Steve McQueen and The Grifters starring John Cusack were made into films. In the Seventies and Eighties Elmore Leonard, George V. Higgins, and James Ellroy wrote particularly fine noir novels. Today, noir is everywhere you look: Tartan Noir (Scotland), Nordic Noir, Seattle Noir, and Prison Noir. You can’t escape it no matter where you go.

So, what’s the point of noir, you might be asking. It seems bleak, dark, and populated by unlikeable losers. Why not just give it a pass?

First, you’d be missing out on some outstanding books and movies. Classic noir films such Double Indemnity, Out of the Past, Sunset Boulevard, Laura, The Third Man, and Touch of Evil turn up on most lists of the top 100 films of all time. Similarly, Double Indemnity, The Postman Always Rings Twice, LA Confidential, The Killer Inside Me, The Third Man, and The Talented Mr. Ripley appear on lists of top novels of the 20th Century.

Second, noir themes, motifs and sensibilities became influential in the movie making of the Fifties and later. Directors such as Otto Preminger, Billy Wilder, Joseph Losey, and Nicholas Ray, who started off making noirs moved onto mainstream film making; for example: Anatomy of a Murder (Preminger), The Apartment (Wilder), The Servant (Losey), and Rebel Without a Cause (Ray) are mainstream films loaded with noir themes and motifs. Noir themes also showed up in films by directors who were not particularly known for noir, such as Alfred Hitchcock (Strangers on a Train, Vertigo), Alexander Mackendrick (Sweet Smell of Success), Robert Rossen (The Hustler) and the melodramas of Douglas Sirk. By the end of the Fifties, noir themes were even appearing in westerns, such as those made by Anthony Mann and starring Jimmy Stewart (Winchester ’73, The Naked Spur, and Bend in the River). Noir films, so-called “neo-noir,” continue to be made today. Examples include such excellent films as: Heat, Collateral, LA Confidential, No Country for Old Men, Fargo, and Pulp Fiction. You’re not going to fully appreciate Quentin Tarantino unless you understand noir. What is the Bruce Willis character in Pulp Fiction anything other than an updated version of Hemingway’s Ole Andreson?

If you ignore noir, you’re ignoring an important influence on modern storytelling.

Third, noir has a lot to say about 20th Century (and 21st Century) America. The noir films of the Forties and early Fifties foreshadowed and predicted the breakdown of the family in America, the destruction of societal norms, and, eventually, the atomization of American society, all of which didn’t become readily apparent until the Sixties—and are all still with us today. Plato said that if you wanted to know what was really going on, listen to the poets. If you want to know where modern-day America’s going, check out film noir.