19 Oct So What Happened to Film Noir?

Posted at 01:24h in Blog by Christopher Wilsher
0 Likes

Noir films were popular in the Fifties and then basically disappeared in the Sixties.

Many of the themes and motifs of film noir were appropriated by television.

Noir strongly influenced popular Sixties TV shows such as “Naked City,” “Peter Gunn,” “The Fugitive,” “The Twilight Zone,” “Alfred Hitchcock Presents,” and “87th Precinct.” In fact, basic noir themes and motifs became incorporated into many of the cop/private detective programs of the Sixties, just as (with a few notable exceptions) noir was disappearing from the movie screens. What happened was that the noir protagonist became the bad guy on the cop show.

Even Don Siegel’s version of “The Killers” was originally intended for network television (it was the first made-for-TV movie), but the network deemed it too violent so it ended up on the big screen. 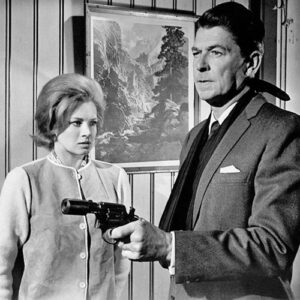 Ronald Reagan and Angie Dickinson in “The Killers”

Noir, so called neo-noir, did make a comeback in the early Seventies. In the wake of Vietnam, the assassinations of JFK, RFK and MLK, Watergate, and the Church Committee (which revealed CIA involvement in assassinations both home and abroad as well as extensive research into mind control), the nation was ripe for a wave of dark, paranoid conspiracy thrillers and that’s what they got in movies such as “The Parallax View,” “Klute,” “Chinatown,” “The Conversation,” “Marathon Man,” and “Three Days of the Condor.” The protagonists tended not to be as flawed as in traditional noir, although things still often ended up badly for them. Another difference is that instead of antagonists who are small time criminals or scheming femme fatales, the bad guys tended to be very rich or powerful or part of a national or even international conspiracy. More conventional neo-noirs of the period included “Get Carter,” “The Killing of a Chinese Bookie,” “The Friends of Eddie Coyle,” and “Charlie Varrick.”

Eventually, the dark shadows of noir got washed away by “Star Wars” and a wave of comic-book movies filled with optimism and good feelings. A new president was about to be elected, one promising morning in America, and the fatalism and pessimism of film noir fell out of fashion again.