07 Dec Why The Big Sleep is Not Noir

Posted at 08:31h in Blog by Christopher Wilsher
0 Likes

Why The Big Sleep is Not Noir

A few weeks ago I wrote a post about why “The Maltese Falcon” is not noir.

Another detective film often confused for noir is “The Big Sleep.”

The Big Sleep, starring Bogart and Bacall and directed by Howard Hawks, was actually filmed in 1944 but not released until 1946. It’s often described noir but isn’t (even though it’s described that way in the beginning of the first sentence of its Wikipedia entry).

Why isn’t it noir?

First, it’s not directed by a German. Just kidding (again) (sort of). 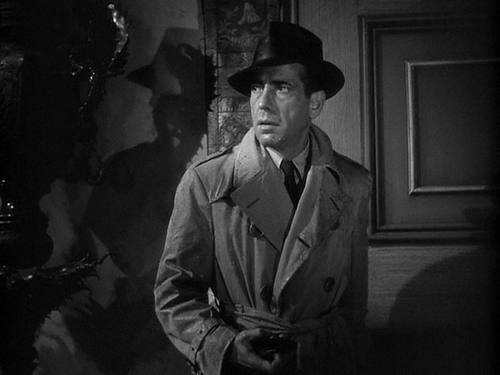 Second, it doesn’t look like noir. At least in “The Maltese Falcon” Huston tilted his camera. I’m not sure Hawks ever tilted his camera in any of his movies except for the opening scene of “Rio Bravo” where Chance (John Wayne) looks down at Dude (Dean Martin) as he scrabbles for a silver dollar tossed into a spittoon.

And the camera angles used are important because they illustrate why “The Big Sleep” is not noir. When a director tilts the camera, he is sending a message: That the world is an unstable place. It can also show that a character is uneasy, disoriented, or unbalanced (your average noir protagonist).

This is not the world of Howard Hawks. The Hawksian universe is a stable, predictable place. Hawks has a “man’s eye” view of things. Man is the master of his fate and can solve any problem if he puts his mind to it. A Hawksian hero is smart, capable, and dependable. In Hawks’s world this is known as being “Good.” Characters who are good at what they do are also good in a moral sense. Somebody who is “Good” can be trusted and can therefore can be a member of the Group. In Hawks’s action movies there is usually a group of good guys (resistance fighters in “To Have and Have Not” airmail pilots in “Only Angels Have Wings” Chance and his ragtag group in “Rio Bravo” the cattle herd drivers in ”Red River” a group of professional wildlife catchers in “Hatari”). It’s difficult to gain admittance to the Group (darned near impossible if you’re a woman) and the ultimate sin is to let down the Group.

The Hawks protagonist is far different from the weak, flawed protagonist of a typical noir, and this is reflected in the main character of “The Big Sleep,” Philip Marlowe (played, again, by Humphrey Bogart. Marlowe, like Sam Spade is private detective. Also, like Spade he is smart, observant, and nobody’s fool. Unlike Spade, he’s also a good person, honest, and morally upright. In the novel, “The Big Sleep” he even compares himself to a knight errant.

Raymond Chandler described Marlowe as: “Down these mean streets a man must go who is not himself mean, who is neither tarnished nor afraid. He is the hero; he is everything. He must be a complete man and a common man and yet an unusual man. He must be, to use a rather weathered phrase, a man of honor—by instinct, by inevitability, without thought of it, and certainly without saying it.”

This is not a noir protagonist.

So we’re 0 for 2 on P.I. films that are often described as noir but really aren’t.

Are there any noir P.I. films?