Posted at 01:43h in Blog by Christopher Wilsher
0 Likes

“Kiss Me Deadly” is Noir

So, “The Maltese Falcon” and “The Big Sleep.” Aren’t noir there any private investigator films that are? After all, the world-weary gumshoe is supposed to be the mainstay of film noir.

Spillane began writing the Hammer series in 1947. In the books, Hammer is basically an unthinking, violent lout who is driven by lust and revenge. The books sold millions of copies. Who said you can’t underestimate the taste of the American people?

“Kiss Me Deadly” was published in 1952 and made into a film by Aldrich in 1955 with a script written by A.I. Bezzerides. The movie version of Spillane bares a passing resemblance to the book version. Both are violent, selfish men who do whatever they want to accomplish whatever they want. But in the book, Hammer is described as successful while in the movie he’s a “bedroom dick” who basically pimps out his secretary, Velda. Hammer’s racket is that he uses Velda to set up some married man and then either blackmails the husband with the evidence of his infidelity or sells it to the wife to use in her divorce. Velda really doesn’t like this arrangement, but she goes along with it because she’s in love with Mike. As for Mike, he doesn’t care if Velda is happy or not.

Another difference between Spillane’s Hammer and Aldrich’s is that the movie Hammer is really stupid. Every step along the way, Hammer makes the wrong decision. He gets a line on something he thinks will be really big (he’s right but not in the way he thinks). In most private eye movies, the police are shown to be not terribly smart and possibly corrupt. But the cop in Kiss Me Deadly (played by Robert Wesley Addy) is sharp and honest, and realizes that Hammer was liable to make a dangerous situation even more dangerous and tells him if he learns anything he needs to go to the police.

But Hammer is too stupid and greedy to heed this advice. His reply: “What’s in it for me?”

But he’s not just stupid and greedy. He’s cruel and sadistic, too. At one point he questions a guy who is an opera aficionado. Hammer breaks a valuable record the guy owns. He does it for no other reason that the guy is too weak to stop him.

Because of his stupidity (he gets tricked by a woman who calls herself Lily Carver) he leads the bad guys to some sort of stolen nuclear device. He doesn’t realize he screwed up until the police tell him Lily Carver had been dead for a week. 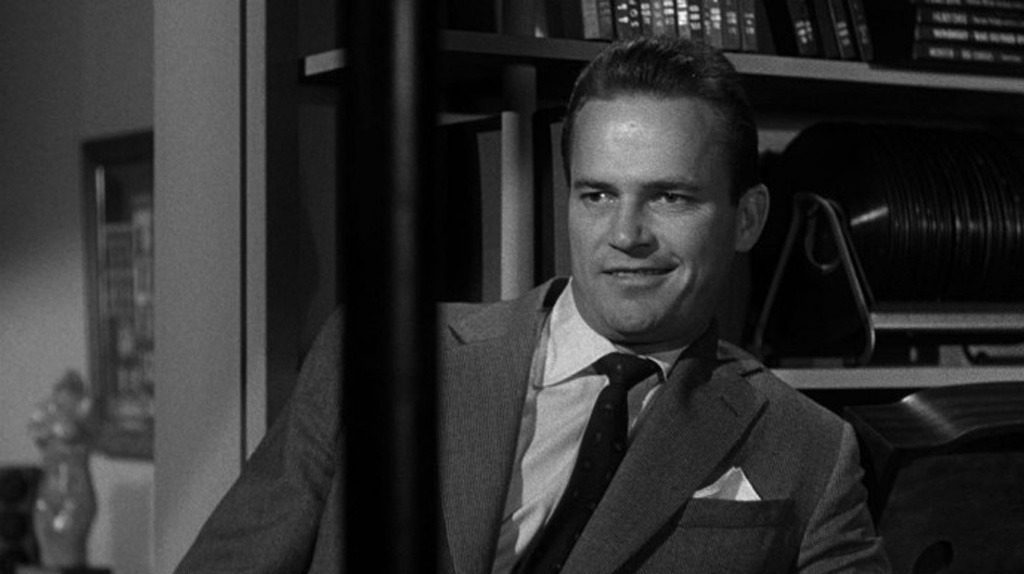 In the end, the nuclear device goes off as Hammer and Velda are trying to run away. There are two slightly different endings but it’s hard to see how they can outrun a nuclear blast.

Spillane was very unhappy with what Aldrich and Bezzerides did to his hero. Bezzerides said, ““I was having fun with it. I wanted to make every scene, every character, interesting…I wrote it fast because I had contempt for it … I tell you Spillane didn’t like what I did with his book. I ran into him at a restaurant and, boy, he didn’t like me.”

Visually, “Kiss Me Deadly” is all noir. You get the tilted camera, low key lighting, shadowy staircases, and you have a flawed protagonist who meets a disastrous end.

So, there you have it. A noir PI film and one definitely worth seeing.