Posted at 06:03h in Blog by Christopher Wilsher
0 Likes

One of the great neo-noirs—heck, one of the great movies of any genre—is “Chinatown” (1974) directed by Roman Polanski from a script by Robert Towne.

The protagonist of “Chinatown” is J.J. (Jake) Gittes (Jack Nicholson), a private detective. The film is set in Los Angeles in 1937. His specialty is digging up dirt in matrimonial cases (he explains that it’s his “métier”). But Gittes isn’t any routine down-at-the heel private eye. He has fancy offices and several employees, and he’s managed to convince himself that what he does to make a living isn’t sleazy.
He’s hired by a woman who claims to be Evelyn Mulwray, the wife of Hollis Mulwray, the head of the city’s water department (as we’ll see, water is a big deal in Los Angles, a city that gets only fifteen inches of rainfall per year). She thinks her husband is having an affair. Gittes follows Mulwray and gets photos of him with a young woman. He turns the photos over to his client and before he knows the photos are on the front page of the newspaper, and it turns out that his client isn’t really Mulwray’s wife. The real Mrs. Evelyn Mulwray (Faye Dunaway), who is rich, threatens to sue. Before you know it Mulwray is dead, apparently the victim of an accidental drowning. The real Mrs. Mulwray isn’t buying it and hires Gittes to find out who set up her husband. 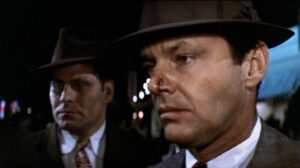 Jack Nicholson and Perry Lopez in “Chinatown”
The plot is dense and complex, but logical (some have called it one of the last great scripts before the movies got stupid). It revolves around a new dam that is going to be built with public money. The water from the dam will be sued to irrigate arid land that has already been bought cheap. The plot also involves Evelyn Mulwray and her relationship with her father, Noah Cross (John Huston), who is basically evil incarnate.

Gittes is a noir protagonist, straight out of the classic era of noir. He’s proud, cocky, and vain. He’s also lonely. And, as with all noir protagonists, he’s not as smart as he thinks he is. First, he’s fooled by the phony Mrs. Mulwray and then he’s fooled by the real Mrs. Mulwray. It’s not until it’s too late that he understands the real story. I’ve written previously that although private investigators are often associated with noir, not many true noir films have private eye investigators as protagonists. “Out of the Past” is one. “Kiss Me Deadly” is another. “Chinatown” is a third.

Nicholson’s performance is often compared to Humphrey Bogart’s performances in “The Maltese Falcon” and “The Big Sleep,” two movies that are, as I’ve argued, often incorrectly described as noir. But Gittes is a true noir protagonist, meaning that he’s not as savvy at Sam Spade or as morally pure as Philip Marlowe. Instead, there’s a broken quality to Gittes. He had been a detective in Chinatown and the suggestion is that he was a little crooked. One time, he tried to do the right thing, but it backfired because as an Anglo cop, he didn’t understand the nuances of Chinatown. As he explains, “I was trying to keep someone from being hurt. I ended up making sure that she was hurt.”

To the extent that the term neo-noir has any meaning, “Chinatown” is a true neo-noir for it upholds the conventions of noir while also subverting them. First, there is the look of the film. Classic noir was all dark, shadowy, and urban, shot with low-key lighting and at night. And there was rain. Lots of rain, so there were numerous surfaces for the ubiquitous neon signs to reflect off of. It added up to a confusing, maze-like landscape where the unsuspecting could easily be lured into a trap.

But “Chinatown” is different. The look is sun-bleached and sepia-toned. The sepia coloration suggests old photographs, maybe those taken almost forty years before. The film also uses open spaces instead of small rooms and narrow streets. It’s not until the very end, when Jake realizes the awful truth that we get a truly full-blown noir mise en scene.
I’ll finish up “Chinatown” in the next post.